The Charter Choice in Madison and the Nation

On Monday, March 9, 2008 The MMSD Board of Education will consider an application from the Nuestro Mundo community to begin the process of chartering a dual language immersion secondary school.

Although the application is very impressive and Nuestro Mundo appears to be a good and well run school, I urge the Board to turn away this effort to expand charters in Madison.  MMSD is initiating an elementary  non charter dual language immersion program and there is talk of a non charter dual language middle school also.  I believe that this is the the better path.

In an editorial today the Wisconsin State Journal puts forth self contradicting nonsense in favor of the charter proposal.  In a letter to that paper last week, Nuestro Mundo parent Judith Kujoth employed questionable and unsupported assertions of causality to advocate for the middle school proposal.  I’m just going to hit the low lights.

Madison needs to get past its outdated phobia of charter schools.

Charter schools are not a threat to public schools here or anywhere else in Wisconsin (emphasis added).

Later in the editorial they note the President Obama has pledged to double the Federal money for charters and note that the group hopes to get $1.1 million in Federal planning grants.  It doesn’t take a genius to figure out that Obama’s funding of charters, like that of George W. Bush, will divert money from traditional public schools.  That $1.1 million that they hope to get is $1.1 million that isn’t and won’t be available for our underfunded district schools.  Yes, charters are a threat.  An insidious threat, because regardless of the merits of a particular proposal or the drawbacks of charters as a policy choice, cash strapped state and local decision makers are easily seduced by the promise of this money.

They are an exciting addition and asset to public schools — a potential source of innovation, higher student achievement and millions in federal grants.

And when charter schools do succeed at something new, their formula for success can be replicated at traditional schools to help all students (emphases added).

This is exactly what has happened in Madison.  Nuestro Mundo pioneered dual language immersion, the district saw good things happening and they are now in the process of “replicating.”

Apparently the State Journal doesn’t really believe this because later they opine:

The School Board should reward their success by opening the door to a charter middle school. Instead, too many board members seem bent on keeping any dual-language middle school within the framework of a traditional school.

So it isn’t about what is best for the district and the students at all, it is about “rewarding” certain people.  This goes to the heart of one big problem with charters:  They divide; they Balkanize.

What is good for the district as a whole and most children can easily get lost when well organized charter groups advocate tirelessnessly for their “rewards.”  This is true at the state and national levels also.  This is another way that charters threaten public education.

Even the most optimistic charter advocates must recognize that there is no realistic scenario where most children will not be in traditional public schools.  The Board’s job is to do what is best for all children; in practice they must make the utilitarian calculations about what is best for most children and that means doing everything they can to strengthen the district schools most children will attend.  This may include limited charters for purposes of innovation and to address persistent problems, but it certainly does not include “rewarding” anyone at the expense of the district as a whole.

Kujoth covered  much of the same shakey ground as the State Journal, so I’m only going to touch on one paragraph in her letter that caught my attention.

Creating a charter school will have many benefits. The law affords charters greater flexibility to create curricula and measure progress. Students in these schools often have higher rates of achievement because educators have flexibility to design teaching methods that appeal to the needs of each student and to change modalities when they aren’t working without being constrained by traditional district practices (emphasis added).

Note the “often” before “higher rates of achievement. ”  In fact there is no consistent evidence that students in charters have any higher achievement, the best evidence is that achievement is about the same or slightly lower than in traditional schools.

I’m skeptical of standardized tests as a measure of achievement, but it worth noting that Nuestro Mundo students have performed below the levels of students in other MMSD and Wisconsin schools and that this difference is more pronounced for low income students (chart from DPI) 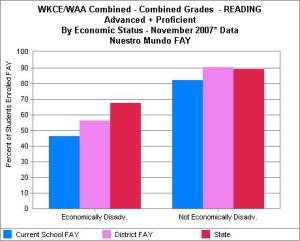 In the next sentence, also with no evidence what so ever, she asserts the cause for this nonexistent achievement gain to be the “flexibility to design teaching methods that appeal to the needs of each student and to change modalities when they aren’t working.”  Since some charters, KIPP for instance,  are infamous for their inflexibility (and resultant push outs of students), this is a laughable generalization about charters.

The last line, the final assertion that “traditional district practices constrain flexibility is also counter to my experience as an MMSD parent.  The teachers my children have had — good and bad — have been very flexible in their teaching.  Even if my experience is not typical and the constraints on flexibility are a real problem isn’t the answer to work to free all teachers from these constraints, not set up a charter where only some children benefit from flexibility?

If these represent the best case for the new charter proposal, the Board should have an easy time rejecting it, unless political pressure holds sway.  I urge the Board to do what is right, not what might be popular.

In the spirit of honesty, I must state that my older son attends James C. Wright Middle School, a charter, if in name only.  At an earlier point in the history of the school, charter status may have been important.  In the years that I know about, Wright functions as a district specialty school, not a charter in any meaningful way.  I would a support a change in status for Wright to reflect this reality.

2 responses to “The Charter Choice in Madison and the Nation”