MMSD State of the District — Communication and Equity 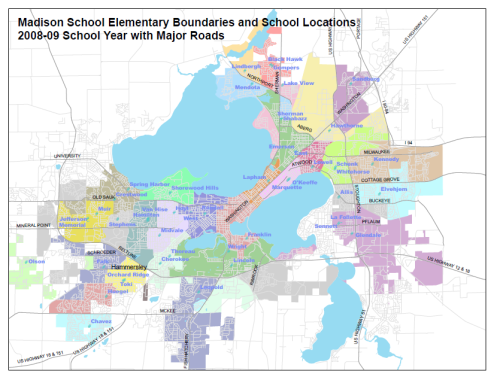 [I neglected to look earlier, “State of the District” presentation was linked off the Board agenda.  It can be found here.]

On Monday, January 25, 2010, 5:30 PM,  at JC Wright Middle School (1717 Fish Hatchery) Madison Metropolitan School District Superintendent Dan Nerad will give a “State of the District” presentation.  It will also be broad and narrowcast on MMSD-TV.  I’m very interested in what will be said.  I’ve been told that among other things it will include updates on the work in response to the Math and Fine Arts Task Forces and will belatedly (by one year and eight months) fulfill the annual reporting requirements of the district’s Equity Policy.  I’m especially interested in that.

Before getting to equity, I want to say a few things about communications.  I think all recognize that the “State of the District” presentation is an exercise in public relations.  How effective an exercise will be seen after Monday, but part of public relations with things like this is the outreach that was done in advance, the hype.  I have to say that I’d give the Public Information department a  C on their advance work.

On the plus side, a press release was issued on January 13; I think I saw it mentioned in the State Journal (but can’t find it on line); an email announcement was sent to PTOs, community groups and other “stakeholders” last Friday, January 15.

There is lots on the minus side.

Besides the note in the paper, I haven’t seen any other advance news coverage.  Maybe there will be something over the weekend, but having Supt. Nerad make the rounds of radio and television giving a tantalizing preview would have increased interest.  Maybe some of that will happen over the weekend and on Monday.

The presentation is not mentioned on the district home page (capture, 1-22-09, 8:32 PM),  nor on any of the pages that link directly to the home page.  That includes, MMSD today, the district’s main newsletter.  These are important points of contact.  In a related matter, MMSD-TV and Fine Arts have Facebook presences but the district does not.

I subscribe the the Board of Education and district announcements, served on a Task Force, Co-Chaired Community and Schools Together (CAST) through two successful referendum campaigns, and maintain this blog; yet was not included in January 15 email distribution list.  I did get an announcement from the district today.  It doesn’t take much to realize that someone like me should be considered a “stakeholder” for announcement purposes.

Too many things on the minus side and none of them are all that difficult to address.

I’ve said so much in other posts about equity, the work of the Equity Task Force and the reporting requirements in the policy that I’m going to keep this brief (there is a much more detailed post on what I would like to see in the required Report here).

The Equity Task Force began our work on February 1, 2006, almost four years ago (for those who track these things, all our meetings were noticed and all our records were public).  We were charged with “making recommendations for an equity policy including: (1) a definition of equity, (2) a statement of the District’s commitment to equity, and (3) guidelines for implementation.”  The process was difficult and sometimes frustrating.   In April of 2007, we finalized our report and it was presented to the Board of Education.  In the following year the Board held a series of meetings primarily devoted to equity and on June 2, 2008 they enacted a new Equity Policy, partially based on some of the recommendations of the Task Force (some other recommendations were discussed and not included, still others were never discussed).

That policy required an annual Equity Report (as noted previously, well over a year has gone by and there has been no Report):

Administration will report on an annual basis to the Board of Education the extent of progress on specific measures in eliminating gaps in access, opportunities and achievement.

Administration will develop an annual report that will provide data on the distribution of staff, financial, and programmatic resources across all schools.

These are the things I will be looking for in the “State of the District.”  Forgive me if I am skeptical that these can be covered properly or sufficiently in the context of the “State of the District” presentation.  Information like this needs to be thoroughly examined in an interactive process.  The Board needs to be active participants in evaluating progress and the lack of progress. This will not happen to any great degree next Monday; I hope that it does in the coming months.

The Equity process has been a long one.  Many good people have put in lots of work to increase equity in our schools.  The policy the Board enacted was designed to assess and facilitate further work.  Although the equity work continues in some fashion via the Strategic Plan and other initiatives (and is perhaps undermined by some other recent initiatives), I think it is wrong to abandon the direct work that the Task Force was part of.  It is also against spirit of the Board Policy to not have  an annual Equity Report that does justice to the reporting requirements.