Board of Education Wrap Up, Quick and Late 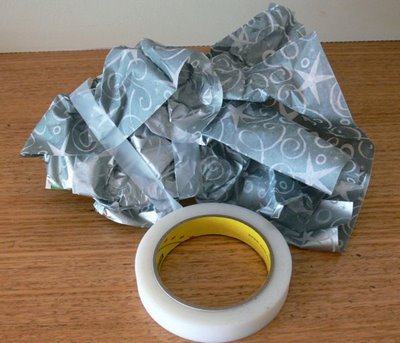 I’m just finding the time to post this on the Monday February 8,  meeting (preview of that meeting here).  To be honest, it wasn’t a very exciting meeting.  Most of the real work was done the previous week, when they met as Committees.

Almost everything on the agenda passed 6-0 (Lucy Mathiak, absent) with no discussion.  A few things deserve a little comment.

It looks like there will be something of a restart on the La Follette area planning.  The Board voted to use technology and other things for 2010-11.  The timeline for the restart was given as “6-9 months.”  I hope the 9 instead of the 6.  Johnny Winston Jr also suggested that the Board be involved in the initial phases, the Board and administration agreed and I think that is good.   Overall a good way to move forward on something that was looking like a big mess.

The new Budget timeline was approved (see Gayle Worland’s Wisconsin State Journal story for more).  So there is now a plan for how to consider $30 million in cuts.  The only big change was that personnel cuts and other cuts will be taken together. Here it is: 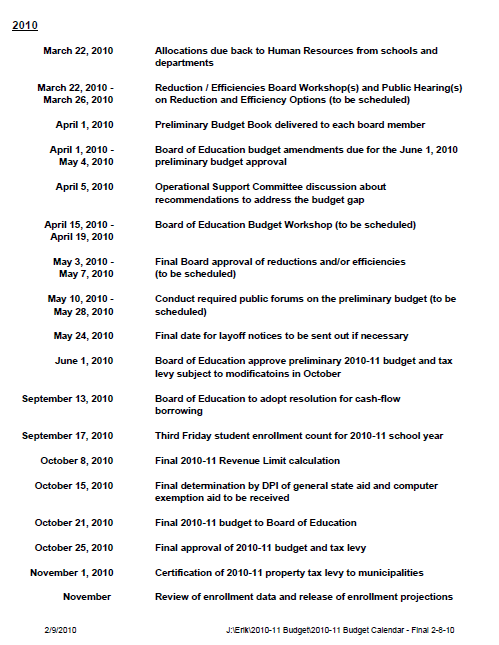 Some things to note.  First, the May 3-7  meeting where the Board approves reductions will be the first meeting for either James Howard or Tom Farley (see here for info on the February 21 Progressive Dane Candidate Forum).  Second, the state mandated budget hearings will be odd this year due to the timing.  At that point the Board can add things back, but no real cuts are possible.  I would really like that hearing to occur at a time when everything is still on the table. I am also somewhat bothered that the Budget Book comes out after the Public Engagement sessions.

I did hear some good things from the Board and the administration about how this will be be done.  They seem committed to gathering as much information as possible, sharing that information with the public, trying to work from some common principles and as much as possible avoiding rancor.  It won’t be easy.  There will be a lot of pressure from the anti-tax crowd to cut and a lot of pressure from others not to cut specific things.   Going into this I do think it is important to keep in mind that the current situation cannot be attributed to local mismanagement.   This is a state created problem.  If you are going to get mad about the school funding situation, get mad at the state officials.

One other thing I’d like to say is that there have been some positive things done on things like 4K and the Strategic Plan where a real work on defining and implementing a vision for  improving educational opportunities has been started and I hope that does not get lost in all this.  The Board Members have expressed similar hopes.

On the Retirement Refinance and 4K funding the Board went with option 2B, smaller overall savings but more front loaded.  I believe the vote was 5-1, with Marj Passman favoring 5A.