All  reports  –  in the media and personal — are that the sit-in at West today was very positive.  I was unable to attend, but am glad that students are demonstrating their concerns and getting some attention. [I just got a robo call about our son being absent t tale part in the sit-in…OK]

Reports posted from Gayle Worland in the Wisconsin State Journal, on WISC-TV and a backgrounder from Susan Troller on the Cap Times “Chalkboard.”

Also this video from last night on WISC-TV:

Looking ahead, this Executive Summary from the Madison Metropolitan School District administration gives some more information about the “High School Curricular Reform, Dual Pathways to Post-Secondary Success” and what’s next.  No time today for an extensive analysis, just noting what comes next and encouraging you to read yourself.

Here is what the new document says about next steps (not quite what the other document outlines):

A flier from the rally also mentions a Open Meeting, Monday October 18 at 5:00 PM.

The plan presented this week is not the Board’s plan. We received the plan the same day the teachers received the plan. The plan was developed by Administration, which is how something like this works. The plan is scheduled to be reviewed by the Board on November 1. This is a review meeting, not a voting meeting. Final review/vote by the Board is scheduled for late November. Now the Board should be reviewing the plan, asking questions and talking/listening to constituents, like students. All feedback is good (if respectful). At the meeting where the Board votes, we can approve/reject the plan as is, modify the plan or approve/reject parts of the plan. We still have a lot of questions and information-collecting to do. Keep your feedback coming as it does help us to understand how this plan would affect each of you. Questions/comments: board@madison.k12.wi.us.

This is a tight time-line, especially for the Student Senate meeting.   To expect anyone, especially busy students to have considered input based on minimal information this quickly it asking a lot.

With that in mind, I want to offer some more background things (lots linked in this post, some repeats).

The best place to start is still the High School Initiatives documents.

I’m having a lot of concerns about the emphasis on standards.  As  noted before, we are stuck with the Common Core Standards and adding the ACT College Readiness Standards (click the links to read more — we are adding many things from the ACT and will be writing big checks for the privilege).  I don’t like standards-based reform much.

Here are some things on Standards in general:

Diane Ravitch, “Standards are within our reach.”

And also these quotes from Deborah Meier elsewhere seem applicable:

If we agreed all the time on most things, we’d never need democracy. But if I want schools that encourage disagreement, it follows that I, too, must compromise. E.g. If I want schools to include the same mix of kids that make up our body politic, then that imposes on someone else’s ideal of public education. If, as Juan Gonzalez argued, schools are the backbone of communities, then neighborhood schools need to be preserved! Ditto for tracking by ability. Can we outlaw schools for “the gifted” to preserve heterogeneity? Can everyone have what is best for themselves while still having the best for the common good?

Warts and all. “Smartness” of the kind we seem lately to revere—the kind that gets you into the Ivy League—is not the purpose of the public’s support for public education. Imagine if our standards were set, not on Harvard, but on our concern for the common good?

On the ACT standards, I found this document to be worth a read:  “A systematic comparison of the American Diploma Project English language arts college readiness standards with those of the ACT, College Board, and Standards for Success.”

An old blog post from “HC English Teachers” that in a positive manner describes the Hersey High reforms — a model for what MMSD is doing –  from an outsider perspective is also interesting.  I keep going back to the fact that Hersey is a 7% or 8% poverty school and West is 35%.  This reminded me of the differences and the conditions for successful reform:

There was a perfect storm that allowed CV to put the program into place… intra-district rivalries, falling ACT scores, an activist superintendent, a principal who was looking for answers. None of those things exist here.

I think there are even more conditions needed, but fear that many are lacking  (or under developed) in Madison.

What is lacking most is a desire for change and confidence that change will bring real improvements.  I’ll add that some of this lack of desire is based on a lack of acknowledgment that West is failing many students.  It doesn’t help there was no mention of achievement gaps in the first document (there is in the second).  Here is one graphic of a gap at West. 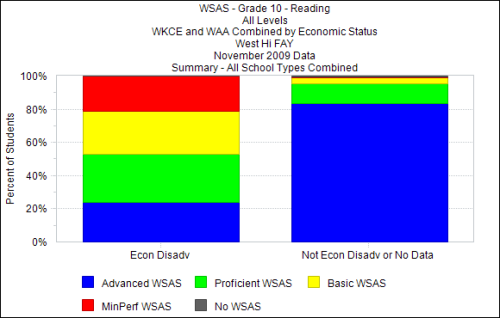 It is also based on a denial that the most advanced classes at West are segregated in many ways.   I think it is worth noting that only 18 African American students, representing 31% of African American 12th graders, took the ACT last year.  I don’t want to give up the inclusiveness of the 9th and 10th grade core classes (and am not sure there is need to), but some change is called for to address persistent gaps and  segregation at the highest levels.

I’ve kind of morphed into the subject of grouping.  I’m going to be lazy and share two things from the Equity Task Force (1 & 2).  The first in a chapter by Adam Gamoran and the second is a statement from the National School Psychologists.  In the intro to the first for the Task Force I wrote:

At the crudest level it is about equity because it is about resource allocations.  Choosing among approaches (or pursuing multiple approaches) will mean dedicating staff, curricular materials, facilities, training and other resources in a manner that will make these unavailable for other uses.  We all understand this.  Looking at our working definition of equity I see other ways that equity is in play.  I don’t have the exact language but my memory is that the three key components are access and opportunity, educational excellence for all, and social responsibility.  On access and opportunity the research is clear that without open enrollments, recruitment of historically underserved populations and structures of support, any ability grouping will result in racial, economic and other segregation.  Even in heterogeneous classrooms using differentiated instruction, an approach that many believe provides wider opportunity and access to advanced instruction, special efforts are often needed to make sure that minorities and others are not overlooked.

Whatever direction we go in, a statement on this should be considered (sorry, that was my position and I am trying to make this as objective as I can).  The real conflicts are about a perceived  tension between excellence and social justice.  Some of this is due to differing ideas about the definitions of both educational excellence and the social mission of public education.  I could go on about each of these for pages, but I will try to be brief.  The research about which approaches produce which academic results for which students are far from conclusive (see the Gamoran).  What muddies the water further is that some believe that excellence is achieved by getting the most students scoring in the highest range, some look to get the fewest students scoring in the lowest range, some look to have the highest scoring students scoring higher and higher….  All of these and more are legitimate definitions and noble goals.

The research seems to indicate that an approach that absolutely maximizes one of these will be less than optimal according to other definitions.  Note the words maximum and less than optimal.  It isn’t that the various approaches necessarily have a negative effect on one metric or  another, it is that that one approach might do better according to one measure and another according to a different measure.  There are choices to be made.

Here is where the social justice issues can come into play.  For many a diverse classroom intrinsically has a nonacademic but none-the-less educational benefit for all students.  Beyond this, the choices (if you accept that it is impossible for a single approach to maximize excellence across the range of definitions) are choices about the academic component of the social mission of the schools.  Is the social mission best fulfilled by catering to the extreme high achievers?  Is the most important social mission to lift students from the bottom to the middle; from the middle to the top…?  I think we can do very well on all these measures; I don’t think anyone believes we can maximize them all simultaneously.  I hope this has helped you see and grapple with the choices we face.

I’ve been thinking about this a lot this week and a phrase keeps popping into my head.  Let me close with this, the motto or ideal of the National Association of Colored Women’s Clubs (circa 1890):  “Lifting as We Climb.”

There are choices to be made and the last thing I want to say is about the choices.

The students, the parents, the teachers, The Board of Education and a surprising variety of people who have been contacting me are all looking for more information.  This is great; informed decisions are the right way to go.

As of now we have two choices — the status quo and the Dual Pathways draft — and there has been very little information about the latter offered, some rose-tinted glasses views of the former and nothing about the possibilities of something in-between.  Among the information that is needed is a clear understanding of a variety of options and what these options will mean in terms of budget, student schedules, potential benefits and acknowledged losses (including possibly some electives and the good things about English 9 & 10 and the Social Studies classes).

One response to “More on West and High School Reforms”