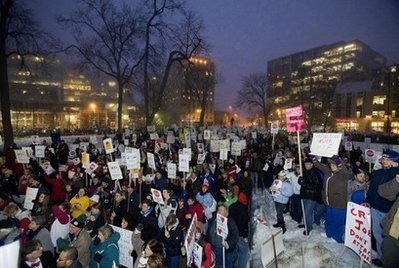 Susan Troller is reporting in the Cap Times that SB 22, the bill creating a partisan, political state charter school authorizing board to override the wishes of local school boards (and more) is dead, for now.  This is a huge victory for  public education in the state,  local control, and the Wisconsin people’s mobilization.

The bill came before the Senate Education Committee on March 23, in the wake of the mass protests.  Hundreds of newly empowered individuals and groups showed up to counter the well laid plans of the FitzWalker gang, School Choice Wisconsin, Wisconsin Charter School Association, American Federation for Children and the rest of the deformers (including Madison Prep’s Kaleem Caire).  The hearing took 10 hours (so long that I had to leave before I could read my testimony).  It was spontaneous, invigorating and beautiful (you can watch it here, via WisconsinEye or read Rebecca Kemble’s report).

It was one of the first occasions where the energy of the protests was translated into this sort of action.   Soon after, much of the energy went toward the Senatorial recall efforts.  This was and is a controversial choice.  Many, myself included, had and have mixed feelings about the wisdom of diverting small d democratic potential into big D Democratic politics.

The wisdom of that choice is still open to debate (and is being debated within the Occupy Movement), but the defeat of SB 22 strengthens the case that it was  a good choice (it does not seal the case by any means).

As Troller explains the post-recall one seat Republican edge made GOP Senator Dale Schultz’s reluctance to support and GOP Senator Mike Ellis’s non-committal enough to kill the bill, for now.

The “for now” means that just that; this could come back from the dead.  One friend suggests that we should all send Schultz and Ellis notes of thanks and support to make sure they don’t defect (and you can do that by clicking their names above) .  My big worry is making sure that the Democrats don’t defect, particularly Senator Lena Taylor.

There are many things I like about Lena Taylor, but she is a favorite of the hedge-fund managers for education deform operating under the name Democrats for Education Reform (DFER, read more at DFER Watch) , having received their generous donations in the past and been named their “Reformer of the Month” for February 2011.  DFER Wisconsin was and is a strong proponent of SB 22.

In politics money talks and these people have money (as the recent Imagine Schools scandals remind us, some of that money was appropriated from schools and children via charter school scams).   DFER and aligned groups dropped hundreds of thousands of dollars into the recent Denver School Board races; with $3.6 million in contributions “Stand for Children” was able to push their deforms through the Illinois Legislature; the list goes on.

So contacting Lena Taylor would be a good idea too.  You can grab talking points from Public School for the Public Good, AMPS comrade Todd Price; I love My Public School, Martin Scanlan of Marquette, and my testimony linked above.  We may not have millions to give, but we people do have the power, when they use it.

Adding to the “what next” list, the Scott Walker recall kicks in very soon and United Wisconsin is the go to place to help out with that.  Just remember that progress may start with getting better people in office, but it isn’t going to get very far if we don’t remain mobilized, remain powerful.