Update 7:45 PM, 6/8/15: There was little or no support for this proposal expressed by Board Members and it is “off the table.”

On the MMSD Board Operations Work Group agenda for Monday June 8, 2015 (5:00 PM), a proposal (pages 19 & 20 of the “2015-16 Budget Review and Input” here)  to delay $4,115,000 in debt payments till 2026 and 2027, and add $1,428,348 in debt service payments, all in order to “Make it Possible to Support Annual Increases in the Tech Plan thru 2019 without Drawing Away Funds from Other Areas of the Budget” (the latest version of the Tech Plan budget has full implementation in 2022). For many reasons (too many to go into here), this seems like a very bad idea. In general, I think we should begin again and create a Tech Plan that we can afford without these kind of shell games.

Here is the key page: 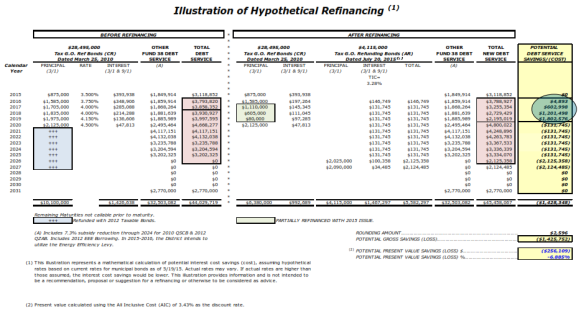 The right hand column has the ugly details.

This not an item up for a formal vote. I will be advising against pursuing this option in the strongest terms (there will be public testimony at the meeting where you can share your thoughts, and the Board can always be contacted via board@madison.k12.wi.us).

Leaving aside the dubious merits of tech purchases as a priority (at a time when we are cutting classroom staff, deferring building maintenance, and looking at more cuts next year and beyond), it is simply bad policy to push debt into the future at a cost of $1.4 million in order purchase or lease items that will not even still be in service when it comes time to pay the bill.  The Tech Plan originally had a three year replacement cycle on most items; more recently that has been changed to a four year cycle (page 126 here, and more here, except the most recent expenditure — voted in April to be placed on hold brought before the Board were for a three year lease on Chromebooks and Tablets, so it is hard to say what the current thinking is).  Whether a three year cycle or a four year cycle, items purchased or leased in 2015 through 2019 will be out-of-service by the time the $2 M+ payments are due in 2026 and 2027.

Even if this “buy now, pay later” scheme made sense, it would only cover the annual expenditure increases through the year 2019 for a plan that now is not supposed to be fully implemented until 2022 and has projected ongoing costs of $6 M or more each and every year thereafter.  It is a very expensive temporary band-aid.

Given the reality of depressing prospects for school budgets in Wisconsin in the foreseeable future, it is hard not to conclude that the Tech Plan adopted by the MMSD Board of Education in 2014 is unaffordable (I was the lone vote against, joined by Luke Gangler, the student Rep).  Instead of tinkering with changing three year replacement cycles to four year replacement cycles, or five year implementation timelines to seven year implementation timelines, and trying desperately to make the existing plan “work” in this reality,  we need to start again.

It is past time to create a plan that we can afford. I have been pushing for this, and getting (almost) nowhere.

Continuing down the path of attempting to salvage an unaffordable plan wastes both staff (and Board) time, and has a high likelihood of creating new inequities among our schools. If we do one, or two, or three years of purchases under the existing plan, those schools will get the full treatment, the Cadillac version. The schools further back in the queue, after the schemes run out and the realities of having to cut staff to buy tablets hit again, will probably not be so fortunate.

I am not against increased tech spending. I was the one who pushed including tech infrastructure in the recent referendum (and when I pushed for other tech expenditures to be included via short term bonding, I was told that they did not want to borrow to pay for ongoing expenses. Presumably that position has changed.  I do believe that any Tech Plan must be affordable, in the sense that using conservative budget assumptions, proposed spending is weighed against the prospect of budget cuts in other areas (including cutting staff).  It also must be equitable, in that it provides a realistic way to provide equivalent access to technology in all of our schools in a reasonable time.

In my opinion,the best place to start on a new plan would be with a needs assessment.  I asked about this when the plan was being approved about a year ago, involving the budget for the assessment, and finally it appears to be in the works.  Let’s put everything on hold, do the assessment, combine it with budget projections, and then move forward.

There will almost certainly be more Tech Plan expenditures on the June 29th Board  agenda (probably the tablets and Chromebooks that were put on hold in April) and the ones that follow. In the absence of an affordable and equitable Tech Plan, I will be voting against these.

Note:  Prior to this post, I had not blogged since being elected to the Board of Education. I have started a few times, but never posted.  Recently I decided it was time to make a real effort to write and post blogs again.  I had hoped that my return entry would be something more positive, but a number of people have asked me for more information on the state of Tech Plan in general and this proposal in particular.  I am not sure how often I will be posting; watch this space and the Progressive Dane site.

Tagged as Technology and Education