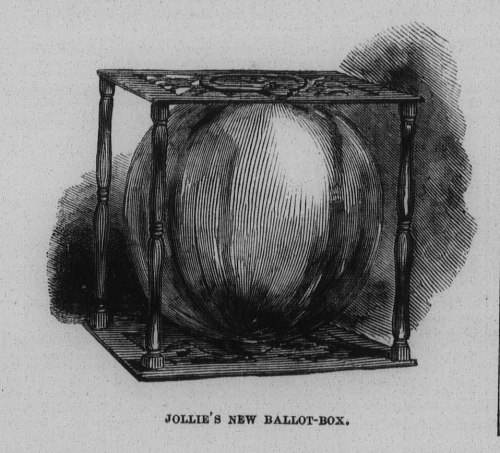 From “The Glass Ballot Box and Political Transparency,” by Ellery Foutch

Transparency and accountability for government bodies depend on the public knowing the positions and actions of their elected officials, and at base that means knowing how they voted.  When decisions to act, to not act, or how to act are made without votes whether in open or private (and here) meetings, transparency and accountability are diminished.  The Madison Metropolitan School District Board of Education too often refrains from exercising their collective power via votes, instead only voicing individual opinions and giving feedback, like a focus group not a governing body.  This creates confusion, and limits transparency and the potential for accountability.  This is one manifestation of a district culture that seeks to control the flow of information, and only do the minimum in relation to transparency.  The recent meetings on the process for selecting an Interim Superintendent serve as examples of this.

The first noticed meeting was on May 13 where the initial legal notice included as a closed session item “Consideration of employment of a district administrator, pursuant to Wis. Stat. Sec. 19.85(1)(c),” but an amended notice changed it to an open session item on the “Interim Superintendent Hiring Process,” as a “discussion” (not an “action” or voting item), and with no materials attached.   A small step toward transparency.

The Board met again on May 20, 2019 in a Special “Workshop” (which generally means no public testimony, more on that below) open session for (according to the notice):

Finalization of Process and Timeline for Hiring Interim Superintendent

This also appears on the agenda as a “discussion item,” (not an action item, no vote).  This timeline was attached to the agenda.

Minutes will eventually be posted for both these meetings, but there is no video for either.  MMSD meeting minutes tend to be very cursory, and rarely are positions, questions, or concerns attributed to an individual Board member (on a few occasions I asked that the minutes include something I said).  This is OK when there is video, but otherwise you have to be there to have much sense of what went on, and the positions of individual Board members.  I don’t know why there was no video for the May 13th meeting, the link on BoardDocs skips the open session and goes straight to an in progress Operations Work Group.  The May 20th meeting was held in a room at East High School, and not streamed or recorded.  You had to be here (there was also apparently some confusion about what room, and accessibility).

Reports from Negassi Tesfamichael in the Cap Times, Logan Wroge in the State Journal, and on WMTV give some details of the May 13th meeting, and illustrate some of the problems caused by the lack of voting.

Let’s start with the Cap Times and the headline: “Madison School Board pushes back timeline for hiring interim superintendent to June” (all italics to quotes added).  Whatever discussions had taken place in private, there was no timeline to be pushed back (or at least none that had been approved by the Board, this story references an earlier statement by Mary Burke, but unless a timeline had been agreed upon in private, there was no timeline).  And there was no push-back because the Board only acts when it votes, and it did not vote.  The problem continues in the lede: “The Madison School Board agreed during a special session on Monday to aim to hire an interim superintendent sometime between June 1 and July 1.”  “Agreed” is not the same as voting (but to those who don’t understand how MMSD operates, it gives the misimpression there was a vote).  The story indicates a 4 to 3 split, or disagreement, on the timeline (Burke, Toews, and Muldrow favoring a shorter process).  Since no vote was taken, it is very doubtful there will be any official record of that disagreement (and if you only read other news sources you would not have been aware of who favored what).

There was also discussion of internal vs external candidates, but again no vote or decision made.  The State Journal uses the phrase “signaled its preference Monday for hiring an internal candidate,” on this (similar imprecise language in the article on the timeline: “…the board settled on naming an interim superintendent sometime between June 1 and July 1″).  WMTV reported “Four of the board members voiced strong support that the interim superintendent should be an internal candidate coming from within MMSD.  Other board members said they were open to the idea of both internal and external candidates.” The Cap Times said “School Board members emphasized a desire to hire someone internally from MMSD.” Without votes, more precision isn’t possible.  I feel bad for the reporters who have to report on the actions taken without votes, as if votes had been taken.  I feel worse for a community that is represented in this manner.

WMTV also reported that “At the conclusion of the meeting, Mary Burke, board president, said she would take the notes from the meeting and draft a timeline for what is next. ”  It is more typical that MMSD staff take the feedback from Board members and interpret it in drafting or revising documents or policies.  Whether the interpretation is done by a Board member or staff, this way of doing business is fraught with problems of confusion and bias in ways that voting avoids.

A timeline is attached to the May 20th agenda.  I assume this is the timeline Mary Burke drafted.  Interestingly this is labeled “v1.2” but there is no public record of a v1.1, nor of a revision process to get from v1.1 to v1.2.  Perhaps that was discussed at one of the meetings.

For this meeting, I am only going to look briefly at Negassi Tesfamichael‘s Cap Times article and Logan Wroge’s in the State Journal.

The Cap Times headline says the Board “finalizes interim superintendent hiring timeline,” and the body of the story says “board members approved a timeline that would lead to an interim superintendent hire at its monthly June meeting.”  I believe the timeline has been finalized, but the Board did not vote and therefore did not “approve” anything.  The phrasing in the State Journal is more accurate.  That headline reads “Madison School Board lays out timeline for hiring interim superintendent,” and the body of the story says “laid out.”  However, the article also flirts with confusion in a reference to the May 13th meeting by saying “The board has already stated a preference for an internal hire. ” “Stated” is stronger than the previous “signaled,” and although an apparent majority of Board members has signaled or stated, the Board only acts, or states, when they take a vote.  No vote means no statement.  The lack of clarity which results from the reluctance to vote is hard for reporters.

I want to note, that despite the statements from some Board members in favor of public input on and in the process, neither of the two meetings discussed here, nor the May 30th closed session (which may be about the Interim hire, more on that below), have had public testimony on the agenda (people did speak to the issue at the May 13th Operations meeting and the May 20th Regular meeting).  According to the timeline, May 31 is the last day for “Community Input.” I don’t see any special link on the Board or district web pages, so I guess that if you are not among the targeted groups listed on the timeline (the Superintendent’s Human Relations Advisory Committee — a group whose meetings were open and noticed before Cheatham came to town –, the Black Educators’ Network, MTI President and Director, and those “Advocates and community groups” Board members reach out to, and schools they visit between May 20th and 31st), but have input to give you should email the Board at board@madison.k12.wi.us.

There is one more thing on the timeline that involves “community input” and also seems to end May 31st: “Finalize list of selection considerations which includes (sic) community input.”  There is no indication if this list will be made public (although, unless it is (mis)classified as a “working document,” an enterprising reporter or interested member of the public should be able to get it via an open records request.

This is probably a good place to state that despite my objections to how it was arrived at,  given the time limitations, the process “finalized” seems generally fine.  I would have preferred that there were more general opportunities for public input, hope the “selection considerations” are made public, but don’t think the final Interim candidates need to be vetted in open meetings (their names should be made public prior to the selection).

However, that does not mean that I don’t think the lack of votes, and the transparency and accountability they allow, are not big deals.  This is a relatively small and rare matter, and in this case little harm was done.   If this were isolated, and atypical, I would not be concerned.  It isn’t; and I am.  You should be too.  The budget process is probably the best (but not the only) example of why.

The Board began discussing (I hesitate to use the phrase “working on”) the 2019-20 budget in December of 2018.  There have been numerous meeting, much feedback, and the only votes thus far have been on “Early Approvals” totaling $646,000 in a budget totaling over $460 million.  Staffing allocations to schools were decided without the Board even knowing what they are, much less voting on them.  The process has been guided by ““Budget Goals and Guiding Principles” the Board never approved.  There was no Board vote on using a base wage increase of .5% — about 20% of what is allowed under Walker era law — as the basis for building the budget.  These things do matter, they are big deals.

Having your elected officials on record on these, via their votes, is also a big deal.  Don’t you want to know whether  they favor smaller class sizes, more SEAs, higher wages… (all of these may be changed via amendments, but significant changes become extremely difficult once the initial — un voted on — numbers are built into the budget, and if there are no amendments, there is simply an up or down vote on the entire budget).  If you don’t know this, how will you know who to vote for when they are up for re-election (“accountability begins at the ballot box….”)?

Wisconsin statutes only allow governing bodies to make decisions by secret ballot when electing officers (even votes in closed sessions are public records).  The statutes are silent on the MMSD practice of making decisions without any votes at all.  You don’t have to be silent.

There is a closed session meeting listed for this week, May 30, 2019 that may be about the Interim hire (it fits the timeline).  The agenda reads “Consideration of employment of a district administrator, pursuant to Wis. Stat. Sec. 19.85(1)(c).” That may satisfy the minimum requirements of open meetings law, but it isn’t very helpful.  In contrast, when the Milwaukee Board of Education was in a similar situation a year ago, their notices included language like this:

This tells public what is going on.  It also flags that “action” will be done in public session.  MMSD should do the same.  I would consider the item on the timeline to “Finalize list of selection considerations which includes (sic) community input,” to be an action, requiring a vote, and a vote that should be done in open session.