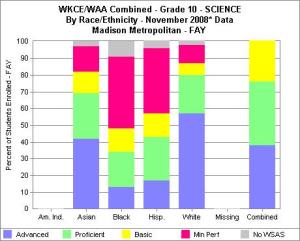 Today was one of two opportunities for 8th graders in the West High School attendance area to take a test to qualify for Accelerated Biology next year (the other is tomorrow, May 6, 2009, 4:00 to 6:00 PM in room 225 at West High School).  I have it on good authority that there were no African American or Hispanic students among the approximately 40 students who took the test today.

The Equity Task Force was very concerned about these sorts of disparities (and those revealed in the graph at the top).  We recommended the following remedy:

Open access to advanced programs, actively recruit students from historically underserved populations, and provide support for all students to be successful.

The Board of Education never publicly discussed this recommendation and did not act on it.

Access is not open, it is by tests.  If recruitment is going on, today’s test takers show that it has not been effective.  I don’t know what supports are in place for those who chose to challenge themselves.

Although a desire to overcome not reproduce societal inequality was behind the recommendation, there was also another more basic idea:  No person (or test) associated with our schools should ever tell a student that their ambitions are beyond them, that they aren’t smart enough, that they should aim lower.

Those who took that test today and did not pass will be given exactly that message; many of those who weren’t taking the test have already heard that message, loud and clear.