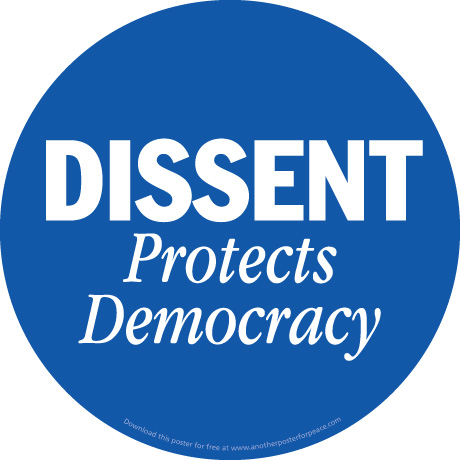 By Milton Glaser, for more information click the image.

A couple more voices of dissent on the Wisconsin State Budget deal (joining those previously noted, Ed Garvey, the Wisconsin Council on Children and Families and me).

Dustin Beilke had this to say on the Isthmus/Daily Page:

How unfortunate, then, that so many of the thoughts running through my mind during the 4 hours and 43 minutes I spent plodding along the course had to do with the state budget and the recent announcement that state leaders were agreeing to more state employee layoffs and “furloughs,” and across-the-board spending cuts. These reductions will mean less aid to the poor and the elderly, larger classes and fewer course offerings for public school children, less financial aid for college students whose parents aren’t rich, fewer books in libraries-a lower quality of life for all of us, a dimmer future for the youngest among us, and desperation for those losing their jobs or their last shreds of dignity.

The small handful of commentators who still track state government mostly praised the governor and the Joint Finance Committee for making these “tough choices.”

I disagree. The tough choice would have been the one that most commentators no longer even seem to consider: raising taxes. Among the state’s editorialists, columnists, bloggers and radio commentators Ed Garvey is the only one I found making this obvious suggestion (The Republicans in the Legislature are saying the Democrats are raising taxes even though they aren’t, but I don’t think that counts.)

Other states are increasing taxes during these times when the circumstances so obviously demand it. The New York Times editorial page is encouraging states to do the right thing rather than further denigrate our economy and our future with draconian cuts and layoffs.

The logic behind cutting budgets during an economic downturn like the one we are in is faulty at best. It says that taxpayers cannot afford higher taxes when they are already losing their jobs and having their homes repossessed. But the unemployed do not pay income taxes. And when one level of government shortchanges us, like the state, the burden falls to another level of government or upon our most vulnerable fellow citizens.

But economic logic is not what takes tax increases off the table. It is the political logic that says it is harder to raise campaign money and win re-election if your opponent can say you raised taxes. It is mostly wrong: Incumbents almost always win no matter what they do. But the campaign professionals who generate the political logic don’t specialize in taking risks and are not in the business of serving the public interest.

John Smart’s post on Fighting Bob is about the education cuts in the budget.

The new state budget realities might lend credence to the notion of cutting funding for our public schools, but as a former school board members I am here to say that is exactly the wrong answer. We must fully support our schools as the surest method to grow the economy out of this economic hole.

Who could possibly think that we can solve our nation’s very serious economic problems with a less-than-well educated work force?

Please, Governor Doyle and legislators, don’t cut school aids, not even by a single dollar. Please allow local revenue limits to increase as much as possible under the law. Please don’t hamstring school boards by repealing the QEO. Please don’t change the rules for contract arbitration. And please do not throw the fiscal responsibility for our schools out to
referendum and onto the backs of local property-taxpayers.

I know, I know – the first comment will be, “So – where will the money come from?” Well, there are ways and there are means.

A recent study showed that a 1 percent increase in the state sales tax would, if dedicated to education, basically solve all of our problems. That would bring us to 6 percent, at the same level as Michigan, and still lower than Illinois and Minnesota. Another suggestion is to reduce the list of tax-exempted products and services, thus bringing in more revenue and making the system more fair at the same time.

There are other revenue plans under consideration in Madison, such as treating capital gains as income – and the combined reporting proposal (an attempt to close the “Las Vegas Loophole” that allows interstate corporations to avoid paying taxes on profits made in Wisconsin by lumping them in with profits made in other states) and, of course, a long overdue increase in the beer tax to $10 per barrel.

If you are not familiar with the Institute for
Wisconsin’s Future, I encourage you to check them out. The IWF was established in 1994 to research our economic policies and make suggestions and corrections. It is a non-profit, non-partisan organization, and is “rooted in the belief that an educated, engaged citizenry is key to improving individual outcomes.”

Take a look at their suggestions, which are well analyzed and supported by thorough vetting.

Although I failed in my recent bid to be elected to the board of the new Chequamegon School District in Glidden and Park Falls, that doesn’t mean that I am no longer concerned about our schools and our kids.

Everyone who knows me knows that. I am contacting my state legislators and the governor’s office asking them to support our schools. Will you do so, too? The future of our state depends on it.

You can register your own dissent by contacting elected officials, writing letters to the editor (details here) and joining the Walk on the Child’s Side on June 16.

5 responses to “Voices of Dissent — The Wisconsin State Budget”