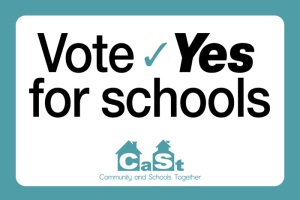 At the April 4 th press conference for the release of the MMSD administration’s proposed budget — at the prompting of the press — the “R-Word” (referendum) was discussed. Since the one time Tax Incremental Finance District disbursement saved Madison from the annual rituals of cuts and conflict this year (and gave Art Rainwater the fitting farewell gift of an opportunity to make his last budget a true “cost to continue” budget), referendum talk was the headline in the Capital Times and the State Journal:

Referendum talk is back for schools
Susan Troller

A gaping $9.2 million hole in the Madison school district’s 2009-2010 budget will likely be stirring talk of a referendum as soon as the city’s new schools superintendent, Dan Nerad, takes office at the beginning of July.

Madison schools may ask for money
By Andy Hall

Madison school officials soon will begin considering whether to ask voters for additional money to head off a potentially “catastrophic ” $9.2 million budget gap for the 2009-10 school year.

We are not alone.

41 Wisconsin school districts had 61 referenda on the ballot April 1st; 33 of these were for basic operating or maintenance expenses (the remainder were to authorize debt for capital projects).

As the State Journal recently editorialized, these referenda are a manifestation of the “no win situation” districts face due to the “system for financing public schools that essentially requires most schools to spend at a faster rate than they are allowed to raise revenue.”

The mess created by the state ‘s outdated and unfair school financing system is not new, but the consequences are mounting. Gov. Jim Doyle and lawmakers tweaked the system a year ago, but the state ‘s political leaders continue to shrink from the overhaul required…

The victims are the students — along with Wisconsin ‘s future in the globally-competitive, knowledge-based economy.

Superintendent Rainwater’s last words at the press conference summed things up nicely (I hope these are not his last words on the subject — Art, enjoy retirement but please continue to advocate for our schools and children):

“The politicians in the state of Wisconsin and those who fund the politicians need to understand what’s going to happen to this state if they lose this great public school system. We will be sitting here 10 years from now, wondering what in the heck happened to us. And what happened is this: We destroyed our ability to compete in a world that is changing.”

Now to the April 1st votes (with links to the Department of Public Instruction summaries):

Now the districts where the referenda failed are looking at what to cut next.

Here is a list of probable cuts (covering two years) from Waupan where the three-year nonrecurring referendum lost by 589 votes:

As the district website asks, “If we continue to eliminate programs and cut staff, it will diminish and erode the quality of education in our district. What will happen to our kids and our community?”

As they have been for over a decade in Wisconsin, cuts like this are being contemplated around the state —  both in districts where referenda failed in those districts where no referenda were held. AMPS will give updates on these as the school budget season continues. For now, just a couple of videos about Wisconsin Heights, where the second referendum in two years failed, this time by 75 votes out of 1,975 cast (3.8%).

From before the vote:

From after the vote:

What can we do? Keep the pressure on our state officials, especially Governor Doyle; support the Wisconsin Alliance for Excellent Schools; join ABC-Madison; write your local newspapers; and last but not least vote and know where the candidates stand before you vote.