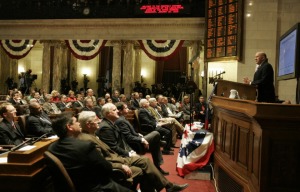 I’m having some trouble understanding what Governor Jim Doyle meant to communicate about education and education finance in his State of the State speech.

There was at least one good thought on the topic, I’ll give him that:

A second grader is not going to be able to come back when the economy is better and pick up where she left off if we fail her today. An older person can not check out of a nursing home and come back in a few years. There are basic needs our state has always met, and just as our predecessors met them in the most difficult times, we have a responsibility to meet them today. yesterday.

But there was also a rephrasing of his new oxymoronic slogan:  “Staying even is the new increase.”  I wonder how that formulation would be scored on a WKCE Reading or Math test?

To make matters worse, after stating that schools are among his top priorities and mislabeling the effective cuts of stable dollar funding as an increase, he continued:

And I am not going to say education funding is off limits. But I will not allow cuts that ruin the quality of our classrooms (emphasis added).

This is the new standard — anything short of “ruin” is OK.  Talk about setting the bar low.  Remember when we used to talk about quality education for all.  I do.

Hell, I remember when Doyle did:

It means fixing our broken system of school funding, and making an ironclad guarantee to every Wisconsin child that this state will give you a good start in life a quality education that enables you to succeed in tomorrow’s economy.

Doyle apparently still sees a need for school finance reform, but his prescriptions are out of whack, or maybe just whack.

We can change school funding in a way that encourages the hiring and retention of good teachers, provides for high standards and encourages efficiencies in our school districts. We can take these steps to make sure our kids get a great education.

The first sounds like “merit pay,” which means asking cash strapped school districts to spend more on (some) teachers.  Explaining how “high standards” will fix school funding is beyond me (and I would guess beyond Doyle to0).  This brings us to the vaunted efficiencies.

For 15 years Wisconsin districts have sought and found efficiencies in order to balance budgets under  broken system based on a structural gap between mandated costs and allowed revenues.  Any reader of AMPS should know that in most districts the vast majority of potential savings via efficiencies has been long exhausted and that for years the cuts have been harming, if not ruining “the quality of our classrooms.”

If you want further evidence, just look at the operating referenda scheduled for this Spring and what districts are asking for.

Books, class size, technology, maintenance…As a state we should do everything in our power to make sure that these basic educational expenses are met.  We don’t.

Governor Doyle knows that and his two-faced “prioritizing” of education while doing nothing to fix a system he himself has called broken is leading us down the road to ruin.

While on the topic of leadership I want to add that the Wisconsin Association of School Boards and Superintendent of Public Instruction candidate Tony Evers both praised Doyle’s remarks on education.   I know all about catching more flies with honey than vinegar, but I think that in this case those who have spent too long in the royal court can no longer even tell when the emperor has no clothes.  Or maybe they can tell, but just won’t.