The Axe Keeps Falling — More Cuts and Layoffs, Trying To More With Less 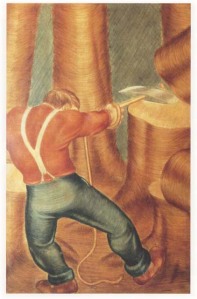 From the Paul Bunyan murals by James S. Watrous at the University of Wisconsin Memorial Union. For more information, click the image.

As noted last week, under Wisconsin’s broken school funding system, Spring is the season for budget cuts  in districts around the state.  The latest places the axe is falling are Minocqua-Hazelhurst-Lake Tomahawk, Kaukauna, and Oshkosh.

Minocqua-Hazelhurst-Lake Tomahawk (MHLT) is a K-8 district serving 550 students spread out over 350 square miles.  It is a classic “small but necessary” district in dire need of realistic  sparsity aid as one part of an improved system of funding schools.  Governor Jim Doyle’s budget proposal cuts the already inadequate sparsity aid by 1%.

The Lakeland Times reports that the district voted to lay off two teacher, cut the employment of three others by 20%,  lay off four educational support team members and discontinue funding for outside curriculum integration with the Lakeland Union High School (LUHS).

These were obviously painful decisions.  One board member had this to say about the curriculum integration defunding:

“We’re facing decisions that you well know,” board member Billy Fried said. “We’re negotiating with teachers. We’re making cuts in staff, and it’s really hard to look them in the face and also look our taxpayers in the face when we’re kind of shrinking our own, yet maintain an outside service that a lot of us feel confident they [MHLT current staff] can do a good job.”

The probability of an operating referendum in the near future was part of the decision:

“If I had any thoughts or felt that from the administration that it would be detrimental to the students, I would do nothing [and continue the service] … I think, too, one thing to keep in mind is we are going, we know we have to go to referendum soon, and I think we need to show we’ve done every possible thing before we go to referendum,” [Board Member] Laura Ahonen said.

Administrators and others did weigh in on the issue.  Principal Rob Way “admit(ted) that it would be a challenge, but one that they could handle successfully.”  Tom Gabert, Lakeland Union High School Board Member said “The major concern with doing it internally, was that past experience has shown that when there is no money on the table, it often gets neglected.”

Combined with the layoffs and this decision means that MHLT staff will be asked to do more with less.  The newspaper simply noted that the layoff notices were given with “much regret.”

Oshkosh is a much larger district (about 10,000 students) and the layoffs are also larger.  Oshkosh has referendum votes scheduled for April 7 on a complicated mix of building. upgrades and maintenance measures.  Although one of the questions asks for operating funds, these are designated for “the costs of small additions and renovations to existing school facilities and equipment acquisition” and would have no impact on the layoffs.

According to the Oshkosh Northwestern, here is what is being done to balance the budget:

Last year, “The district filled a $1.4 million hole in its budget… entirely by cutting non-personnel expenses such as maintenance and department funds.”  These cuts are part of the reason that there is now a maintenance operating referendum on the ballot.  What an insane circle of robbing Peter to pay Paul and then asking for money to pay back Peter while taking back from Paul…This has to end.

WLUK-TV has more on the story:

Note that both larger class sizes and fewer options will result from the cuts.   According to the Northwestern the middle school schedule will be reconfigured  “allowing each teacher to do more,” (I’ll add “with less” because that’s what is happening, and note that the “more” is in terms of classes and students taught and the the reality in terms of quality and learning will likely be that they are doing less).

The Kaukauna layoffs were actually approved on March 9, 2009.  With so many cuts it is hard to keep up.

Kaukauna serves about 4,100 students with a staff of approximately 500 and a budget of about $52 million.  In order to meet the projected $2.9 million shortfall for 2009-10, the Board froze administrator salaries, and laid off over 10% of their teachings staff.  The projections are based on very conservative estimates of future revenue caps, but past experiences with losing students due to open enrollment and underestimates of costs have taught the Board to be conservative.  One Board member noted that the new cuts will probably lead to the loss of more students via open enrollment.

Delayed maintenance projects,  threatening safety are also a factor in the layoffs.

To avoid big cuts last year, Kaukauna closed a school and sold the administrative building.  The layoffs will mean in increase of about two students per class.  Past cuts mean that like the teachers, administrators will be doing more with less:

Board President Jeff McCabe and clerk Cindy Fallona pointed out that because of cuts, administrators have had to tack on more duties without being compensated. Among them are financial officer Bob Schafer, who is overseeing buildings and maintenance, and human resources director Mary Weber, who is serving as Park principal. Randy Hughes, special education and pupil services director, has helped with administrative duties at an elementary school. Eric Brinkmann, Haen principal, tracks student academic performance for the district.

Superintendent LLoyd McCabe correctly identified Wisconsin’s dysfunctional system of educational investment as the source of all these troubles:

McCabe is hoping state lawmakers will tackle the school funding issue to relieve pressure on districts.

“I think that there’s pretty good agreement that state funding has to be revised and the problem that the state has is that they don’t have the money to do anything about it,” he said.

“Wisconsin schools cannot continue to produce students who rank at the very top of the nation with the funding structure that exists today.”

This leads directly to my “join the fight” plea.

If we don’t put/keep the pressure on, nothing will happen except more cuts, more referendum fights, more kids not getting the education they need and deserve, fewer kids reaching adulthood with the tools to be successful…we all need to get and be active.

Use your own experiences to write your own letters to the editor:

Contact the Governor, your Senators and Representatives.  Make them keep their promises (for more as-yet-unmet promises from Governor Doyle, see here and here).

Connect with activists around the state and support real change by joining the Wisconsin Alliance for Excellent Schools.  Keep up-to-date with SFN by signing on as a School Finance Network supporter.

Talk to your friends, neighbors, co-workers…spread the word.