Changes at the High Schools a Done Deal?, An Open Letter

I’m running for Common Council and shouldn’t be spending time on this, but the issues are very important to me, so I’m doing it, but as short and sweet as I can.

The issues are the  failure of the MMSD Administration to follow basic practices of open inclusive governance and the implementation of segregative policies.

Below (and here) is an open letter drafted and signed by 18 West High parents on Friday 1/7/2010.  Understanding the letter requires some background and context.  The background  — along with the latest news and some final thoughts –follows. 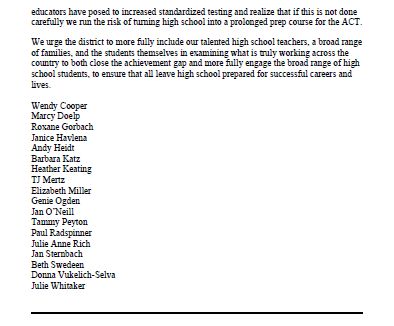 On October 15 2010 hundreds of West Students protested proposed changes in our High Schools and their exclusion from the decision-making on these changes.  Subsequently, the proposal was renamed “(Dual Pathways” is in the dustbin of history) and vague statements about a more open and inclusive process were made (AMPS posts on this here, here, here and here).

After a contentious parent meeting at West on these proposals, a group of parents who wanted to have some say in the reforms  began meeting and emailing.  It is important to note that the views of this group on the various aspect of the reforms are diverse, but all wanted to be part of an open process (I strongly favor some aspects and oppose others, see the links to AMPS posts above).  Only some members of this group signed the letter.

Last Thursday these matters appeared on the Board of Education agenda for the first time.  It was a workshop meeting — no public testimony —  and nothing was slated for action.   Not all supporting  materials were linked to that agenda.  I’m not going to do a blow-by-blow of the meeting.

The important development was that it was revealed that the changes in high school structures for English and Social Studies at West and Memorial — the changes the prompted the protest (uploaded here, I don’t believe this document has ever been posted by MMSD) would appear in the handbooks for 2011-12 that had to go to the printer on Tuesday January 11.  Remember, this information was not public prior to the meeting and there was no way for the Board to act on it.  This is what prompted the letter.

I have been informed that the result of this “process” is that  the planned changes, the segrative changes,  will appear in the course catalog that is sent to the printer on Tuesday.

This is no way to run a school district and it is certainly no way to institute a reform that to be successful requires the confidence and support of parents, students and teachers.   If you don’t like this, let the Board and Supt Dan Nerad know (board@madison.k12.wi.us; dnerad@madison.k12.wi.us).

In conclusion, I want to reiterate that I support much of the reform package and believe in the sincerity of the motives of those behind it.